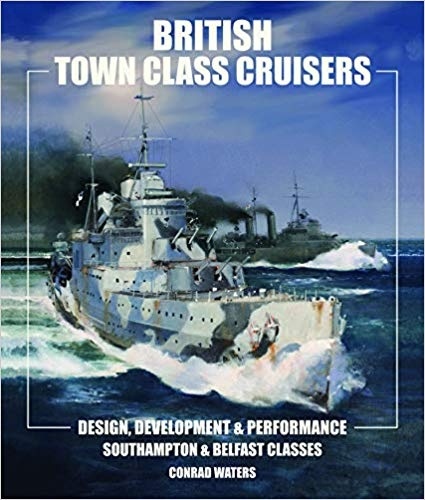 Entering service between 1937 and 1939, the ten British Town' class cruisers were the most modern vessels of their type in the Royal Navy when the Second World War began. Built in response to large 6-inch gunned cruisers in the US and Japanese Navies and primarily designed for the defence of trade, they saw arduous service in a wide range of roles, playing a decisive part in victories such as the Battle of the Barents Sea and the destruction of the German Scharnhorst at the North Cape. The cost was heavy: four of the ships were lost and the other six all survived heavy damage, in some cases on more than one occasion.

In this major study, Conrad Waters makes extensive use of archive material to provide a technical evaluation of the Town' class design and its subsequent performance. He outlines the class's origins in the context of inter-war cruiser policy, explains the design and construction process, and describes the characteristics of the resulting ships and how these were adapted in the light of wartime developments. An overview of service focuses on major engagements, assessing the extent to which the class met its designers' expectations and detailing the consequences of action damage. Concluding chapters continue the story into the Cold War era, examining the modernisation programme that kept the remaining ships fit for service during the 1950s. Heavily illustrated with contemporary photographs and drawings by A D Baker III, John Jordan and George Richardson, British Town Class Cruisers provides a definitive reference to one of the Royal Navy's most important Second World War warship designs.