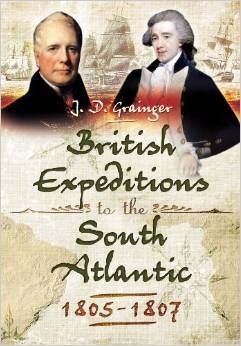 Between 1805 and 1807 the British mounted several expeditions into the South Atlantic aimed at weakening Napoleons Spanish and Dutch allies. The targets were the Dutch colony on South Africas Cape of Good Hope, which potentially threatened British shipping routes to India, and the Spanish colonies in the Rio de la Plata basin (now parts of Argentina and Uruguay).

In 1805 an army of around 6,000 men was dispatched for the Cape under the highly respected General David Baird. They were escorted and assisted by a naval squadron under Home Riggs Popham. The Cape surrendered in January 1806.

Popham then persuaded Baird to lend him troops for an attack on Buenos Aires. Buenos Aires was taken in July but the paltry British force (around 2,400 men) was then besieged and forced to surrender in August. Popham was later court marshaled for exceeding his orders.

In Feb 1807 Montevideo was taken by a new (officially sanctioned) British force of 6,000 men. Whitelocke, the British Commander then attempted to retake Buenos Aires (not least to free British prisoners from the first attempt) but was defeated by unexpectedly fierce resistance stiffened by armed creoles and slaves. After heavy losses he signed an armistice, surrendering Montevideo and withdrawing all his forces. He too was court-martialed.

One of the major themes of this new account is the strong Scottish connection  Baird and Popham were both Scots, and the 71st Highlanders made up the main force in the Cape and Pophams adventure. Another is the unlooked for consequences of these actions. The arrival of Scottish Calvinist ministers in the Cape influenced the eventual development of apartheid, while successful resistance to the British, with little help from Spain, shaped and accelerated the independence movement in South America.