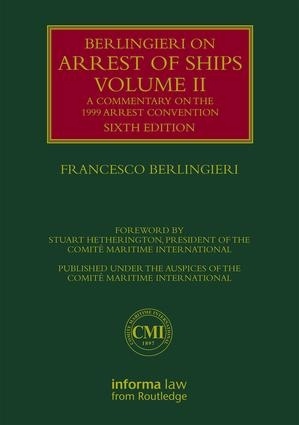 Now presented in two convenient volumes, the sixth edition of Berlingieri on Arrest of Ships is an invaluable source of information, detailing the claims in respect of which a ship may be arrested, the conditions for obtaining an order of arrest, the need for a security, the manner by which the ship that has been arrested may be released, the possibility of a multiple arrest and the jurisdiction on the merits.

Focused on the 1999 Arrest Convention, volume II provides a unique, thorough, and updated commentary, analysing each provision with reference to its interpretation in a significant number of States Parties. Moreover, the original comments have been reviewed on the basis of the Travaux Préparatoires of the Convention, which the Author has collected and arranged under each article. In addition to this, the Travaux Préparatoires are now included as a new and important appendix to the volume.

Written by a renowned expert in the field, and analysing the various conventions relating to the arrest of ships in an article-by-article and paragraph manner, this book is a useful reference tool for practitioners, as well as academics and post-graduate students of maritime law.