August Gale. A father and daughter's journey into the storm 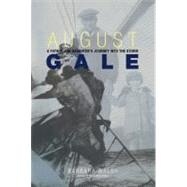 August Gale. A father and daughter's journey into the storm

In August Gale, Pulitzer Prize-winning journalist Barbara Walsh--who has interviewed killers, bad cops, and crooked politicians in the course of her career--faces the most challenging story of her lifetime: asking her father about his childhood pain. In the process, she takes us on two heartrending odysseys: one into a deadly Newfoundland hurricane and the lives of schooner fishermen who relied on God and the wind to carry them home; the other, into a squall stirred by a man with many secrets, a grandfather who remained a mystery until long after his death. Sixty-eight years after the hurricane that claimed several of her ancestors, Walsh searches for memories of the August gale and the grandfather who abandoned her dad as a young boy. Together, she and her father journey to Newfoundland to learn about the 1935 storm, and along the way her dad begins to talk about the man he cannot forgive. Over the next four years, they take many more trips together, recreating a violent hurricane and a small boy's tender past. Secretly, the daughter holds onto a hidden desire: to heal her father and redeem the grandfather she has never met.