All at Sea: Naval Support for the British Army During the American Revolutionary War (Reason to Revoluti 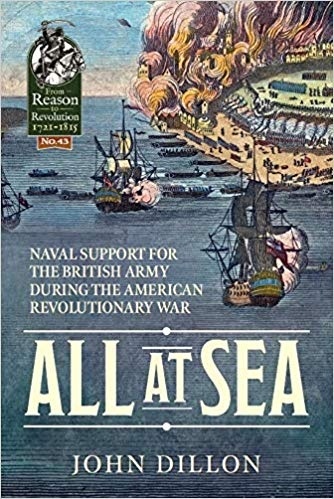 All at Sea: Naval Support for the British Army During the American Revolutionary War (Reason to Revoluti

The American Revolutionary War was a conflict that Britain did not want, and for which it was not prepared. The British Army in America at the end of 1774 was only 3,000 strong, with a further 6,000 to arrive by the time that the conflict started in the spring of 1775. The Royal Navy, on which the British depended for the defence of its shores, trade and far-flung colonies, had been much reduced as a result of the economies that followed the Seven Years War. In 1775 the problem facing government ministers, the War Office, and the Admiralty was how to reinforce, maintain and supply an army (that grew to over 90,000 men) while blockading the American coast and defending Britains many interests around the world; a problem that got bigger when France entered the war in 1778. With a 3,000 mile supply line, taking six to eight weeks for a passage, the scale of the undertaking was enormous. Too often in military histories the focus is on the clash of arms, with little acknowledgement of the vital role of that neglected stepchild - logistics. In All At Sea, John Dillon concentrates on the role of the Navy in supporting, supplying and transporting the British Army during the war in America. Because of individual egos, other strategic priorities, and the number of ships available, that support was not always at the level the British public expected. However, without the navy the war could not have been fought at all.