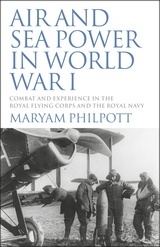 The Great War tore Europe apart killing over 35 million men and challenging the notion of heroism. Air and Sea Power in World War I focuses on the experience of World War I from the perspective of pilots and sailors and demonstrates that the army-centric view of war studies has been too limited.

The Royal Flying Corps, created in 1912, adapted quickly to the needs of modern warfare and was driven by the enthusiasm of its men. In contrast, the lack of modernisation in the Royal Navy, despite the unveiling of HMS Dreadnought in 1906, undermined Britain's dominance of the seas. By considering five key aspects of the war experience, this book analyses how motivation was created and sustained: what training did men receive and how effectively did this prepare them for roles that were predominantly non-combative? How was motivation affected by their individual relationship with weaponry development, and how different was defensive service on the Home Front, when in close proximity to ordinary civilian life?

Featuring new primary source material, including the journals of service men themselves, this book looks at the changing reputation of the services during and after the First World War and the extent to which these notions were created by the memoirs of pilots and sailors. This will be essential reading for students and scholars of World War I and of Naval, Aviation and Military History.