Admiral Byng "his rise and execution" 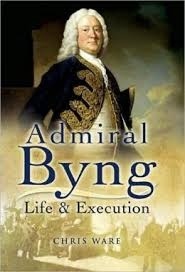 Admiral Byng "his rise and execution"

Born the son of George Byng, a favorite of the king and himself an admiral and member of the admiralty board (and later First Lord of the Admiralty), John Byng seemed destined for a shining career in the Royal Navy. He saw his first fleet action at Cape Passaro, the elder Byng's finest hour, as a Captain's Servant, aged just 14. He qualified as a lieutenant at 19 years old (although the minimum age was 21) and was Post Captain at 23. By the outbreak of the Seven Years' War he had risen to Admiral of the Blue. Then it all went wrong with the Battle of Minorca (20 May 1756), where his failure, or rather the nature of it, earned him accusations of cowardice and a court martial. His trial and execution were the hottest topic of the day, the media lampooning him mercilessly and his reputation has never recovered. Chris Ware reassesses Byng's whole career and carefully untangles the politics surrounding his final days to see how far his poor reputation is justified.
This is a valuable and long overdue addition to the literature of the Georgian navy.