A War Betwixt Englishmen "Brazil Against Argentina on the River Plate" 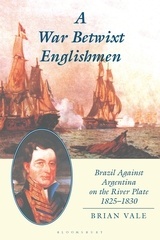 A War Betwixt Englishmen "Brazil Against Argentina on the River Plate"

In 1825 the Empire of Brazil went to war with the Republic of Argentina; the pretext was control of the north bank of the Plate, and consequently of the river itself. The conflict lasted for three years, the Argentinians dominating on land, the Brazilians at sea. As a compromise, the state of Uruguay was created as a buffer between the two.

Providing a study of the naval war and its international repercussions, this book describes the struggle between Brazil, a maritime power with a huge navy and an extensive sea-borne commerce, and Argentina, which had tiny naval forces but a huge international trade carried mostly in British and American ships. It is the story of cat and mouse amid the shallows and fogs of the River Plate, as the Brazilian navy slowly strangled Argentinian trade in the face of audacious attacks by a small squadron led by the legendary William Brown; and of daring single-ship actions in the blue rollers of the Atlantic as swarms of Argentinian privateers took on both neutral vessels and Brazilian men-of-war.

British and American trade were the major casualties of these tactics, and the book provides an account of the international diplomatic and naval actions which followed.