A history of the world in sixteen shipwrecks 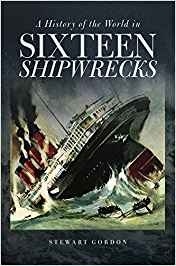 A history of the world in sixteen shipwrecks

Stories of disasters at sea, whether about Roman triremes, the treasure fleet of the Spanish Main, or great transatlantic ocean liners, fire the imagination as little else can. From the historical sinkings of the Titanic and the Lusitania to the recent capsizing of a Mediterranean cruise ship, the study of shipwrecks also makes for a new and very different understanding of world history. A History of the World in Sixteen Shipwrecks explores the age-old, immensely hazardous, persistently romantic, and ongoing process of moving people and goods across the seven seas.

In recounting the stories of ships and the people who made and sailed them, from the earliest craft plying the ancient Nile to the Exxon Valdez, Stewart Gordon argues that the gradual integration of mainly local and separate maritime domains into fewer, larger, and more interdependent regions offers a unique perspective on world history. Gordon draws a number of provocative conclusions from his study, among them that the European “Age of Exploration” as a singular event is simply a myth: over the millennia, many cultures, east and west, have explored far-flung maritime worlds, and technologies of shipbuilding and navigation have been among the main drivers of science and exploration throughout history. In a series of compelling narratives, A History of the World in Sixteen Shipwrecks shows that the development of institutions and technologies that made the terrifying oceans familiar and turned unknown seas into well-traveled sea-lanes matters profoundly in our modern world.