A family outing in the Atlantic 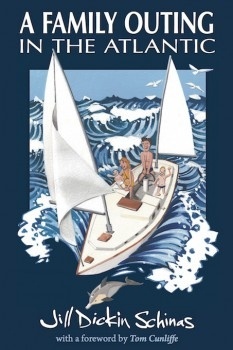 A family outing in the Atlantic

Wen she set off to cross the Atlantic as part of a delivery crew, Jill Dickin Schinas had no idea that she was embarking on a whole new life, but within a week of setting out she and the skipper were making plans for a journey to Cape Horn. One year later the couple were on their way but had detoured up the Amazon to get married. Two years after that they were crossing the Atlantic again, this time from the Caribbean and this time with the ships company enlarged by the addition of a two year old son and a babe in arms.
Together the little family then headed directly for the Falkland Islands and the southern tip of South America  travelling via the Bahamas, the Azores, Portugal, the Canaries, Cape Verde, Senegal, Guinea Bissau, Guinea Conakry, Cote dIvoire, Ghana, Sao Tome and Principe, Uruguay, Argentina, and various tenanted and untenanted islets and lumps of rock cast adrift in the Atlantic Ocean. Seven years after setting out, they almost reached their destination

On the face of it, this book is a travelogue, but it is also a portrait of the cruising lifestyle  the hand-to-mouth, alternative lifestyle, not the early-retirement luxury cruise.

Yes, we were bound for Cape Horn in as much as we had a destination, this indeed was it. But we were in no great hurry, and even this goal was viewed as little more than a staging post on our journey, for we meant to journey indefinitely. Truly, it was not a place but a lifestyle which we were setting forth to find.

The familys adventures range from fighting gales and battling with immigration officials, to exploring uncharted African waters and abandoning ship to board a chopper via the winch cable. There is much in here that will be of value to other yachtsmen and other travellers, and heaps which will appeal to armchair voyagers and to families seeking to turn away from the nine-to-five motorway and tread a road of their own.

Includes a brief glossary for people not conversant with sailing terminology.

By the author of Kids in the Cockpit (a guide to sailing and cruising with children).

The Schinas family are talented people. Theres nothing on the planet that Nick cant fix, while Jill is an artist of character. The children are developing in the same mould, but the overriding feature of all their lives and the guiding spirit of this book, is their self-sufficiency and courage to make their own choices, come fair weather or foul.
Casting fate to the ocean winds without visible means of support in the third millennium demands a lot more guts than ever it did thirty years ago. Keeping going, despite producing three fine children and surviving a capsize off the Falklands that ended on the winch cable of an RAF helicopter, shows the true spirit of seafaring.
 Tom Cunliffe