A Century of Sea Travel. Personal accounts from the Steamship Era 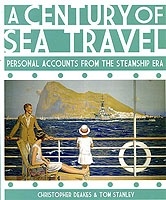 A Century of Sea Travel. Personal accounts from the Steamship Era

This book is a voyage through the life of the passenger steamship, a voyage described by travellers who sailed on these vessels, and it carries within it their thoughts and experiences, mirrored here in words and pictures. The pictures are memories of ships and places in times gone by, glimpses of steamship travel through the years.
In memoirs and letters home, diaries and journals the writers recorded every aspect of their seagoing experiences: they wrote of their ship, its crew and their fellow passengers, of the food and entertainment on board, of romance, accidents and disasters, and of being dreadfully sick. They noted incidents on board that amused or angered them, described the ports at which their ship called, and the fear and excitement of storms at sea.
The writers were emigrants of adminstrators, soldiers, men of letters, youg men seeking their fortune, wives on their way to new homes in distant lands: some were rich, many were poor and escaping the hardship of downtrodden lives; all had in common the experience of voyaging at sea.
The authors woven their words into a narrative that describes so evocatively a world that has now disappeared but that, with a huge collection of rare and beautiful illustrations, brings back to life the glorious heyday of the steamship.
CONTENTS:
There Go the Ships. Departure
Great Steamers White and Gold. The Ship
A Cabin to Dance in. Accommodation
The Minimum of Activity, and the Maximum of Gossip. At Sea
Not a Very Sober Crowd but Very Amusing. The Passengers
Tea and Boiled Boots. The Food
The Strain of Relentless Whimsy. Enterteinment
Thinking, Feeling, Loving. Waves of Romance
A Flick of Sunshine on a Strange Shore. Scenes along the Way
The Howl of the Wind, the Tumult of the Sea. Storms, Seasickness and Disasters
A Pint of Beer a Day. Troopships
As Human as Ourselves. The Crew
Farewell, Monsieur Traveller. Arrival.
Bibliography